In the morning, the east light streams in and illuminates the beautiful stained glass windows of Holy Rosary Church. The church was dedicated on July 4th 1920, but the Slovenian and Croatian parishioners had been saving money for its construction since 1902. They were able to move quickly to construct the church, and install the windows, statues and the three large bells in the tower. Here descriptions of the saints depicted in the windows and the members of the parish who sponsored and paid for them.

On the south side of the church,
the window closest to the Sacred Heart
altar depicts Saint Anne, the mother of
the Virgin Mary. Members of the
St. Ann’s Society No. 134 (the women’s lodge)
of the National Croatian Society
sponsored the window.

St. Francis Xavier, shown with handcuffs and a staff, was born in Pamplona, Spain in 1506 to a wealthy family. In 1525, Francis  enrolled at the University of Paris and through his roommate, St. Peter Faber, became a friend of Ignatius of Loyola. In 1534, Francis joined Ignatius of Loyola’s community, the Jesuits, and did missionary work in the Portuguese territories in India. He worked with the poor, with children, and with his Portuguese countrymen who had fallen away from the faith. Francis also traveled to Japan, then to China, where he died in 1551.
The window was sponsored by the Kalcevic Brothers, who owned grocery stores in Globeville. 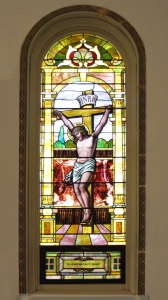 Jesus on the Cross. This window was donated by Konstanty Klimoski, who was a supporter
of St. Joseph’s Polish Church as well as Holy Rosary.
Klimoski was a prosperous businessman in Globeville.

St. Christina of Bolsena, Italy, is venerated as a Christian martyr of the 3rd century. She was the daughter of a rich and powerful magistrate, who hoped she would become a pagan priestess. Angered by her conversion to Christianity, her father had her thrown in prison and tortured, but Christina was miraculously healed. Steadfast in her beliefs, her faith led 300 people to embrace Christianity. Christina was executed with a sword, near Lake Bolsena, Italy, and her feast day is celebrated on July 24th. This window was a gift from Mrs. Christina Rucinska.

On the north side of the church, by the statue of St. Anthony 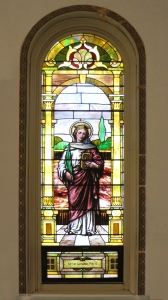 St. Catherine of Siena, born March, 1347; died at Rome April, 1380. She was the youngest of a very large middle-class family. At eighteen, she entered the Dominican Third Order, and the sisters taught Catherine to read. Catherine ministered to the sick and the poor, and a group of followers gathered around her. She composed letters for the spiritual instruction and encouragement of her followers, and also began calling for reform in the Church. In 1378, the Great Schism began, splitting Christendom between two, then three, popes. Catherine spent the last two years of her life in Rome, pleading on behalf of Pope Urban VI and unity in the Church. She ranks among the spiritual writers of the Church, and, in 1970, Pope Paul VI named Catherine and Teresa of Avila doctors of the Church. This window was the gift of Katherine Peketz, active in the Western Slavonic Association.

John the Baptist was born to Zachariah and a relative of the Virgin Mary, Elizabeth. Beginning his public ministry around 30 AD, John attracted large crowds with a message of repentance and baptism. When Jesus came to him to be baptized, John said, “It is I who need baptism from you.” After John baptized Jesus, John’s popularity grew and King Herod became alarmed. When John condemned Herod for marrying Herodius, the divorced wife of his half-brother, Herod had him arrested and imprisoned. Herod’s stepdaughter Salome asked for the head of John and he was beheaded. His feast day is June 24. This window was paid for by John Peketz, a grocer and founder of the Western Slavonic Association. 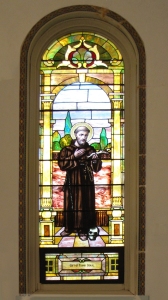 St. Francis of Assisi was born about 1181, one of several children of a prosperous silk merchant, Pietro di Bernardone, and his wife Pica de Bourlemont, a noblewoman. When he was young, Francis lived a high-spirited life, spending money freely and seeking pleasure. An illness caused him to gradually re-evaluate his values, and he began to devote himself to a life of poverty and penitence. Francis founded the men’s Order of Friars Minor,  the women’s Order of Saint Clare, the Third Order of Saint Francis and the Custody of the Holy Land. One of the most venerated figures in history, he died in 1226, and his feast day is October 4th. It’s fitting that this window was paid for by Frank Bokal, a humble laborer at the Globe Smelter.

Michael the Archangel isn’t a saint but the leader of all the angels. His tasks are to fight Satan, to escort the souls of the just to heaven, and to fight for the Church. Michael is mentioned in the Bible several times: in Daniel, and in the Epistle of St. Jude. Most dramatically, in Revelations, Michael and his angels do battle with a dragon. In this window, Michael is depicted crushing a dragon, but is shown without wings. This window was sponsored by Michael Giba, a grocer.